Simon was born on August 27 1921 in Waldheim Saskatchewan as the son of Henry and Katherine Bergen. His parents were married on December 15 1916 in Waldheim. His sisters were Mrs. A.J Schultz. Mrs. C. L. Friesen, Esther Sara, Edna and Katherine Elizabeth Bergen.
He was a farm labourer and member of the United Church. In his spare time he liked to go to shows and liked general reading, fishing and hunting too.
He enlisted on November 30 1943 in Westminster British Columbia and he went overseas to the UK on June 2 1944 and he went thereafter on July 14 to France.
Simon was killed in action on Tuesday August 15 age 22 in the D Coy near Falaise and he was temporarily buried 2 km’s East of Soulangy and reburied on May 17 1945 in Bretteville S/Laize.
His medals were: 1939-45 Star; France Germany Star; War Medal; CVSM & Clasp. 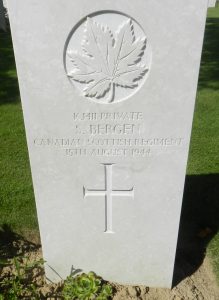