Theodor was born on September 19 1914 in Winnipeg and was working as a machine operator in Vancouver when called up for NRMA service. He volunteered for active duty at Vancouver on 21 Jun 44, received his basic training at 131 CABTC Camrose Alberta, and

completed his infantry training at A.16 Calgary in Oct 44. He arrived in UK on 31 Dec 44 and left for NW Europe on 24 Mar 45. He joined 1 C SCOT R in ‘A’ Coy on 18 Apr 45 as it prepared to leave Zwolle for Groningen, and four days later he was first reported missing in action and Theodor was then killed in action on Sunday  April 22 1945 age 30 in the fighting to liberate Wagenborgen. He was temporarily buried in Siddeburen and on February 15 1946 reburied in Holten.

At his headstone: REST IN PEACE EVER REMEMBERED BY HIS FATHER, SISTER AND BROTHERS 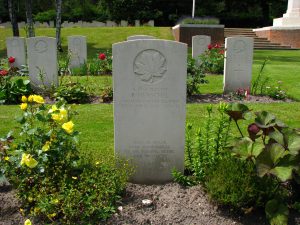