Thomas was born on March 9 1918 in Vancouver as the son of Sam D. and Grace Craig (both Scottish). They were married on April 28 1904 in Scotland. He was married on September 14 1942 in Victoria British Columbia with Violet Craig, of Victoria. Their daughter was Karen Lee Craig. His brothers were John, George, Sam and Angus (in the army too) Craig. His sister was Maymie Treewood and half-sister Agnes Nole.
He was a labourer and member of the Church of England. His hobby was photography and he liked reading photography books.
He enlisted on September 21 1942 in Victoria and he went on June 24 1944 overseas to the UK and he went thereafter on July 18 1944 as reinforcement to France and he was wounded in this unit on September 26. He was finally seriously wounded in action on November 25 1944 during a patrol near Groesbeek
Thomas died of these wounds on Monday November 26 age 26 in the C Coy and he was temporarily buried in Nijmegen and he was then on August 8 1945 reburied in Groesbeek.
At his headstone: EVER REMEMBERED, EVER LOVED, HIS MEMORY LINGERS WITH US ALWAYS
His medals were: 1939-45 Star; France Germany Star; War Medal; CVSM & Clasp. 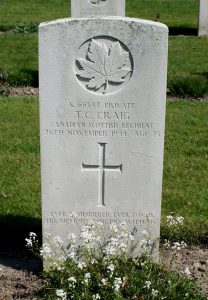