Thomas was born on February 25 1922 in Amulet Saskatchewan as the son of Samuel Edwin (in the army too) and Marie Hull, of Vancouver. His brother was Clifford George Hull.
He was a millworker and member of the Church of England. He played football and baseball, liked swimming and reading detective stories. His hobbies were carpeting and boat building.
He enlisted on December 15 1941 in Vancouver and he went on June 14 1944 overseas to the UK and he went thereafter on October 28 to NW Europe.
Thomas was killed in action on Wednesday March 28 1945 age 23 near Emmerich Germany during the battle of the Rhineland. And he was temporarily buried in Vrasselt Germany and he was then on February 13 1946 reburied in Groesbeek.
At his headstone: SO HE PASSED OVER, AND ALL THE TRUMPETS SOUNDED FOR HIM ON THE OTHER SIDE
His medals were: 1939-45 Star; France Germany Star; War Medal; CVSM & Clasp. 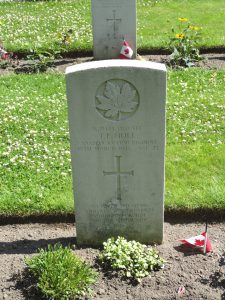