An American of Welsh decent in The Canadian Army

The capital of Overijssel was freed. In the town of Zwolle was the beginning of the festivities come to initiate a bit already. But the clashes were not over yet.
In Voorst, north of Zwolle, fell at the beginning of the evening on the 14th April 1945 a series of German mortars. The 1st Btn of the Canadian Scottish Regiment had taken positions in the newly liberated northern part of Zwolle. Private Thomas Llewellyn Thomas lay still. His helmet was pierced. He was mortally wounded.
A week after his death Chaplain RL Seaborn wrote to Tom’s mother. Seaborn told what had happened: “He was killed in action in the evening of April 14th on the northern outskirts of Zwolle in Holland. We had just occupied this area When the enemy dropped a number of mortar bombs on it: a fragment from one of them pierced Tommie’s helmet and Caused his death “.
At the local cemetery were already four crew members buried in the Royal Air Force. Beside them a place was cleared for Tommie. At the funeral, a large number Zwolle citizens present to pay their respects to the fallen Canadian liberator.
Tom Thomas was an outsider in the Canadian Army. He was American by birth. On August 26, 1919 he and his twin brother Bill under way, in Milton, Oregon. His parents were both from Wales emigrated to the United States. They were, however, not very long there. In 1926, Tom had to be seven, moved the family farmer to Penticton, British Columbia, Canada. Since father Stephen gave his occupation as a farmer and he chose a career in the Canadian military.
Tom Thomas already had a long career as a soldier sitting on. On April 27, 1940 he joined the company. In June 1942, he was shipped to England, and he was there when Allied forces on D-Day stormed the shores of Normandy. On June 3, he went on board one of the many ships that commanded the soldiers to France, on June 6, he stormed with his mates of the Canadian Scottish Regiment Europe.
Tom had an erratic career in the army. He started as a private and ended as a private , but now he had the rank of lance corporal and acting sergeant had with the corresponding pay. However, he squeezed a few times from it without permission, he refused to enter a command and became belongings. It earned him reprimands, reprimands, deductions from wages and three days light arrest. And ultimately the final demotion to private .
He entered the battle relatively unscathed, severe bruising to his thigh and a sprained ankle after during training in Canada. The bruised left thigh, he was in the hospital for twelve days in June 1940, the swollen ankle he was admitted two days. In between he was another six days in the hospital with a boil on his back and eight days when he was felled by the flu in September 1940.
Once on the battlefield in northwest Europe he kept intact. After six months he got a break. He allowed nine days leave for England in February 1945. On February 19, he reported back to his regiment. He began in late March at the latest military operation that Germany had to bring to its knees. The trail ended before Thomas finally in Zwolle.
Thomas Llewellyn Thomas from Penticton, BC, in June 1946 was reburied at the Canadian War Cemetery in Holten: Plot 9, Row H, Grave 16. Source: findagrave.com

The last message on his personal card: “SOS 1 CSR wef 14 Apr 45 Killed in Action.” In plain Dutch: Thomas is no longer part ( SOS = struck off strength ) of the 1st Canadian Scoittish Regiment.

A plaque was unveiled on April 14 2021 for him in Westenholte (Zwolle) on the occasion of the 76 Liberation Day of this town. 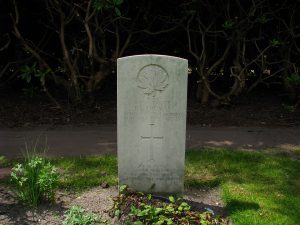