Tom was born on August 18 1918 in Hulatt British Columbia as the son of Charles Henry and Harriet Jarmin Weaver. His parents were married on June 8 1903 in Southport England. He was married on January 1 1941 in Revelstoke British Columbia with Mary Constance Weaver, of Prince George, British Columbia. They had a daughter Constance Ann Weaver. Mary remarried after the war as Mrs. Clapperton. His brother was Charles Henry Weaver and his sisters  were Mrs. Hettie Carmen McMillan and Mary Josephine Weaver.
He was a millworker and member of the Presbyterian Church.
He enlisted July 23 1940 in Prince George and he went on February 13 1943 overseas to the UK and he went thereafter on June 6 1944 to France for the D-Day landing. He was later wounded in action on July 16 and transported to a hospital in the UK, he recovered and disembarked France again on September 6.
Tom was killed in action on Monday October 9 age 26 near the Leopold Canal in Belgium and he was temporarily buried in Maldegem and reburied on July 16 1945 in Adegem.
At his headstone: REMEMBERED ALWAYS
His medals were: 1939-45 Star; France Germany Star; Defence Medal; War Medal; CVSM & Clasp. 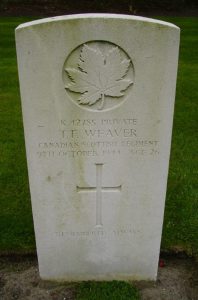