Walter was born on January 29 1907 in Bern Switzerland as the son of Frederick Fahrni (place unknown) and of Marie Fahrni (nee Guller), of Bern. His best girlfriend was Barbara Langley and she was mentioned in his last will because he did not have any contact with his family in Switzerland.
His profession was a painter and he was member of the Lutheran Church (OD).
He enlisted on March 8 1943 in Vancouver and he went overseas to the UK on September 1 1943.
Walter was thereafter killed in action on Tuesday June 6 1944 age 38 in the first wave C Coy during the D-Day landing. He was temporarily buried in Vaux near Graye s/Mer and on August 9 1944 reburied at Ryes.
At his headstone: ”I HAVE FOUGHT A GOOD FIGHT, I HAVE FINISHED MY COURSE” II TIMOTHY IV.7
His Medals were: 1939-45 Star; France Germany Star; Defence Medal; War Medal; CVSM& Clasp. 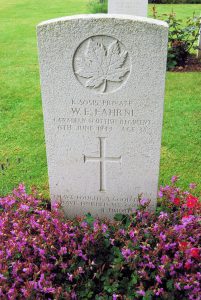