Walter was born on May 15 1915 in Trail British Columbia as the son of William and Catherine Morrice. His parents were married on February 5 1908 in Aberdeen Scotland. Walter was married on August 1 1940 in Winnipeg with Anne Morrice, of Winnipeg. His brother Gnr William Morrice was serving overseas in Italy and his sister was Mrs. E. Coutiere.
His profession was a machinist and he was member of the Roman Catholic Church.
He enlisted on May 25 1940 in Victoria British Columbia and he went overseas to the UK on September 2 1943 and he went thereafter to France as reinforcement on June 9 1944.
Walter was killed in action on Saturday July 15 age 29 in the D Coy near Caen and he was temporarily buried there and he was on September 13 1945 reburied in Bretteville S/Laize.
At his headstone: I THINK OF HIM IN SILENCE NO EYES SEE ME WEEP, IN MY HEART A MEMORY I KEEP. HIS WIFE ANNE
And his medals were: 1939-45 Star; France Germany Star; Defence Medal; War Medal; CVSM & Clasp. 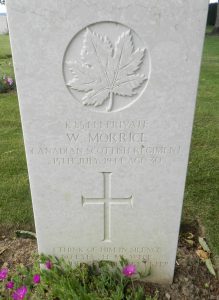