Walter was born on August 27 1913 in Tisdale Saskatchewan as the son of Thomas and Mary Robinson (deceased) of Vancouver. His parents were married in 1912 in Melfort Saskatchewan. He was married on September 4 1943 in Vancouver with Myrtle May Robinson of Vancouver. His sister was Mrs. Dorothy Budney.
He was a shipyard foreman and member of the Presbyterian Church. He liked bowling, swimming, woodwork and read newspapers and fiction.
He enlisted on May 30 1944 in Vancouver and he went on December 31 overseas to the UK and he went thereafter on February 24 1945 to NW Europe.
Walter died of wounds on Wednesday April 11 1945 in a hospital in Lochem age 31 because he was seriously wounded in the A Coy during the battle of Deventer. He was temporarily buried in Lochem and was reburied on February 1 1946 in Holten.
His medals were: 1939-45 Star; France Germany Star; War Medal: CVSM & Clasp. 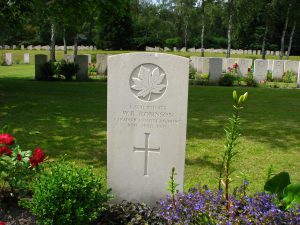