Wilfred was born on May 17 1911 in Williams Lake British Columbia as the son of John Jack and Lily (deceased) Hutch, of Williams Lake. He was married on June 29 1938 in Abbotsford British Columbia with Rosalie Annie Hutch of Williams Lake. And their sons were Weslie Jack and Wilfred Wayne Hutch. And two sisters Chrissie and Ada Hutch were already deceased.
His profession was a labourer/horseman and he was member of the Church of England.
He enlisted on February 26 1941 in Williams Lake and he went overseas to the UK on June 25 1942 and he went thereafter on Tuesday June 6 1944 to France for the landing on D-Day.
Wilfred died of wounds on Friday June 9 age 33 in the A Coy near Putot en Bessin and he was temporarily buried there and he was reburied on January 31 1945 in Beny S/Mer.
At his headstone: EVER REMEMBERED BY HIS WIFE AND SONS
And his medals were:1939-45 Star; France Germany Star; Defence Medal; War Medal; CVSM & Clasp. 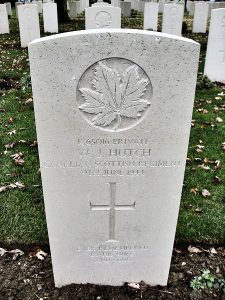