William was born on October 6 1920 in Nanton Alberta as the son of William McKay and Jennie Edith Smith (American), of Brantford, Ontario. His parents were married on February 20 1913 in Nanton. His brother was Harry McKay Smith and his sisters were Mrs. Margaret Jean Cole, Roberta Luella Smith and Kathryn Smith.
He was a sampler at an assay office and member of the United Church. He liked baseball, softball, hockey and hunting and he read fiction and various subjects.
He enlisted on August 27 1942 in Prince Rupert British Columbia and he went on September 2 1943 overseas to the UK and he went thereafter on June 6 1944 to France for the D-Day landing.
William died of wounds due to an accident with mines on Saturday July 1 age 23 in the D Coy near Rots Le Hamel and he was temporarily buried in Le Hamel and reburied on February 5 1945 in Beny S/Mer.
At his headstone: REST IN PEACE
His medals were: 1939-45 Star; France Germany Star; Defence Medal; War Medal; CVSM & Clasp. 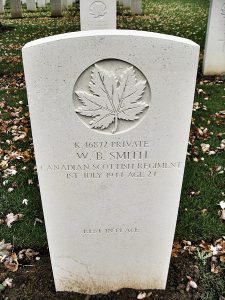