William was born on November 8 1922 in Langford British Columbia as the son of Douglas B. F. and Cecilia Mary Bullen, of Langford. His brothers were J.D. F, J.T., R.G. and R.M Bullen (all four were in the army too).
He was a student and member of the Church of England.
He enlisted on February 6 1942 in Victoria British Columbia and he went on December 20 overseas to the UK and he went thereafter on December 30 1944 to NW Europe. He was seriously wounded in action on March 28 1945 and he had an amputation of his right under leg then.
William died of these wounds on Friday March 30 1945 age 22 near Emmerich during the battle of the Rhineland. And he was temporarily buried in Bedburg Hau Germany and he was then on September 24 1945 reburied in Groesbeek.
At his headstone: HE WILLINGLY GAVE HIS ALL
His medals were: 1939-45 Star; France Germany Star; Defence Medal; War Medal; CVSM & Clasp. 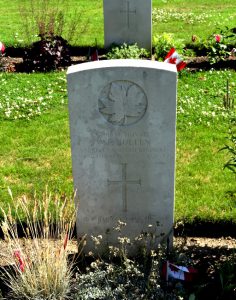