William was born on August 3, 1909 in Kingston, Surrey, England as the son of William James Moore (Irish) and Lily Moore (English). His parents were married on August 17 1895 in Brighton England. He was married on November 30 1940 with Barbara Elizabeth Moore, of Edmonton. He was the brother of Mrs. Margaret Walters, Mrs. Violet Scott, Mrs. Daryl Goad, Mrs. Alice Trevelyan and Mrs. Nell Gillard. And his deceased sister Lois Moore in 1934.
His profession was a store manager and he was member of the Church of England.
He enlisted on February 2 1943 in Edmonton and he went overseas to the UK on July 23 1943 and he went thereafter to France on June 6 1944 for the D-Day landing.
William was killed in action on Saturday June 9 age 34 in the A Coy near Putot en Bessin and he was temporarily buried there and he was on January 18 1945 reburied in Bretteville S/Laize.
And his medals were: 1939-45 Star: France Germany Star; DefenceMedal; War Medal; CVSM & Clasp. 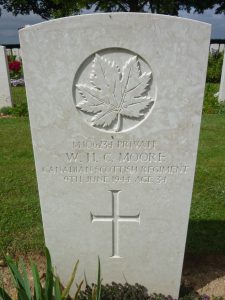