Willis was born on February 19 1925 in Truro Nova Scotia as the son of Albert Michael and Mildred Alice Neil. His brothers were Charles Albert, Sylvias Elgin (overseas in the army), Sylvias Graham (overseas in the army), James Garfield, Milton Addison, Robert Borden, Douglas Grant, Gordon Winston and Allen Loran Neil. His sisters were Lucilla Adelaide, Annie Catherine and Audrey Isabel Neil. And Wilfred Laurie and Mosher Alwin Neil died already in the infancy.
He was a labourer and member of the United Church.
He enlisted on October 14 1943 in Halifax Nova Scotia and he went on May 7 1944 overseas to the UK and he went thereafter on June 23 to France.
Willis was killed in action on Sunday August 13 age 19 in the A Coy near Falaise and he was temporarily buried in Soignolles and reburied on May 14 1945 in Bretteville S/Laize.
His medals were: 1939-45 Star; France Germany Star; War Medal; CVSM & Clasp. 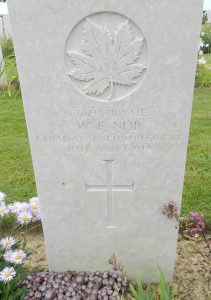