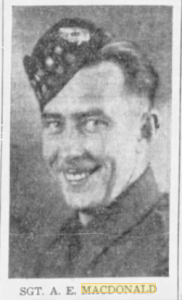 Albert was born on September 30 1919 in Penticton BC as the son of Albert Earnest and Margaret K. E. Macdonald. He was the husband of Gladys Mary MacDonald, of Victoria, British Columbia. Their children were Jacqueline (5) and Ronald (3) and his brothers were Harold and Frank MacDonald.

Albert (Jeff) was a grocery clerk prior enlistment and member of the Church of England.

He enlisted on September 9 1939 in Victoria BC and he went overseas to the UK on September 2 1941and he went thereafter on June 6 1944 during the D-Day landing to Normandy. And after that he went back to England (date and reason unknown) and disembarked France again on September 3.

He was captured during a patrol in January 1945 and was seriously wounded at the Waal River (Holland).

Albert died of these wounds whilst prisoner of war on Tuesday February 6 1945 at the age of 25 at Haldern West-Germany and he was temporarily buried there and reburied on August 12 1946 in Holten.

At his headstone: One of the greatest One of the best May God grant him Eternal rest

CVSM & Clasp and The Military Medal, awarded in November 1944 due to very bravery conduct near The Leopold Canal Belgium and Eede Holland.

He served with the 1st Bn The Canadian Scottish Regiment and The North Nova Scotia Highlanders. 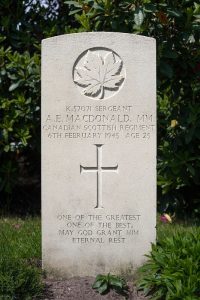