Albert was born on September 9 1916 in Nanaimo British Columbia as the son of John and Mary Ann Patterson, of Nanaimo. He was the husband of Elsie May Patterson nee Brown (English). His parents were married on August 14 1897 in England. His brother John Graham Patterson was in the RCAF and his three sisters were Mary Edna, Evan and Hannah Robina Patterson.
His profession was a mechanic and he was member of the Presbyterian Church. He liked all team games and a little reading.
He enlisted on July 25 1940 in Nanaimo and he went overseas to the UK on March 30 1943 and he went thereafter to France on June 13 1944 as reinforcement.
Albert was killed in action on Friday July 7 age 27 at Neuf Mer near Vieux Cairon and he was temporarily buried there and he was reburied on October 13 1945 in Bretteville S/Laize.
At his headstone: SLEEP ON, DEAR SON, IN GOD’S KEEPING. EVER REMEMBERED BY WIFE, MOTHER, DAD AND FAMILY
And his medals were: 1939-45 Star; France Germany Star; Defence Medal; War Medal; CVSM & Clasp. 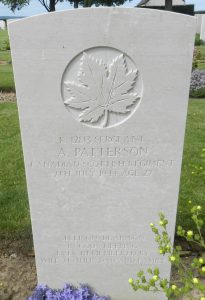