Allen was born on January 30 1913 in Calgary as the son of John Clements (deceased in 1934) and Ada Cope (2nd marriage). He married on March 12 1941 in Penticton  British Columbia with Margaret Rose Clements and their son was Kenneth Allen Clements. His sister was Mrs. A.W. Boult.

He was a sawmill worker in Vancouver and member of The United Church.

He enlisted on July 11 1940 in Kelowna British Columbia and he went on May 7 1944 overseas to the UK and he went thereafter on June 13 to France. He was promoted on September 19 1943 to corporal instructor and he was promoted on January 8 1945 to Sergeant in the area of Nijmegen and he became this officially on April 8 1945.

Allen was killed in action on Saturday April 21 1945 age 32 op during the liberation of Wagenborgen. He was temporarily buried in Siddeburen and on February 15 1946 reburied in Holten. 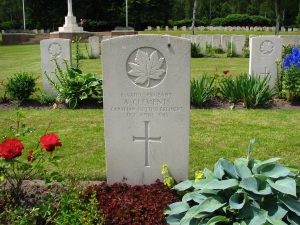