Ira was born on September 2 1916 in Moncton New Brunswick as the son of Clarence O. and Jessie Lutes (deceased). He was married on February 20 1943 in Hackney England with Rose Lutes nee Sendler, of Southend-on-Sea, Essex, England. And she remarried after the war as Mrs. Branscombe and lived in Parkton New Brunswick.
His profession was a miner and he was member of the Baptist Church.
He enlisted on July 17 1940 in Zeballos British Colombia and he went overseas to the UK on August 24 1941 and he went thereafter to France on June 6 1944 for the D-Day landing.
He was on June 9 taken on strength from the Canadian Scottish Regiment to the North Nova Scotia Highlanders.
Ernest died of wounds and due to an amputation of his thigh thereafter on Tuesday June 13 age 27. He was temporarily buried in Reviers and reburied on December 21 1944 in Beny s/Mer.
At his headstone: HE DIED THAT OTHERS MAY LIVE. FOR EVER CHERISHED IN OUR MEMORY 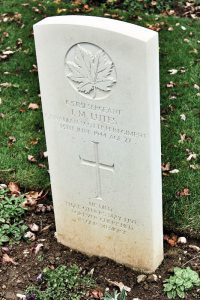