Thomas was born on October 4 1914 in Longgriggend Scotland as the son of Hugh Haggarty (killed in action on July 2 1918 in France) and Mary Crawford Haggarty (deceased). He was married on January 2 1940 with Olive Evelyn Haggarty. They had a son William Hugh Haggarty. Olive remarried as Mrs. Kowalski after the war. His brother was Richard Haggarty (in the army too) and his sister was Janet Ruisuarl.
He was a cook and member of the United Church.
He enlisted on December 16 1940 in Vancouver and he went on September 2 1941 overseas to the UK and he went thereafter on June 6 1944 to France for the D-Day landing. He was wounded in action on June 11 and was taken then to an UK hospital and disembarked on July 30 France again.
Thomas was killed in action on Tuesday August 15 age 29 in the A Coy near Falaise and he was temporarily buried at 2 km’s East of Soulangy and reburied on May 17 1945 in Bretteville S/Laize.
His medals were: 1939-45 Star; France Germany Star; Defence Medal; War Medal; CVSM & Clasp. 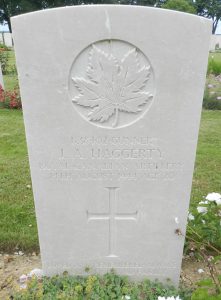